The impact of University reopenings on COVID-19 cases in Scotland 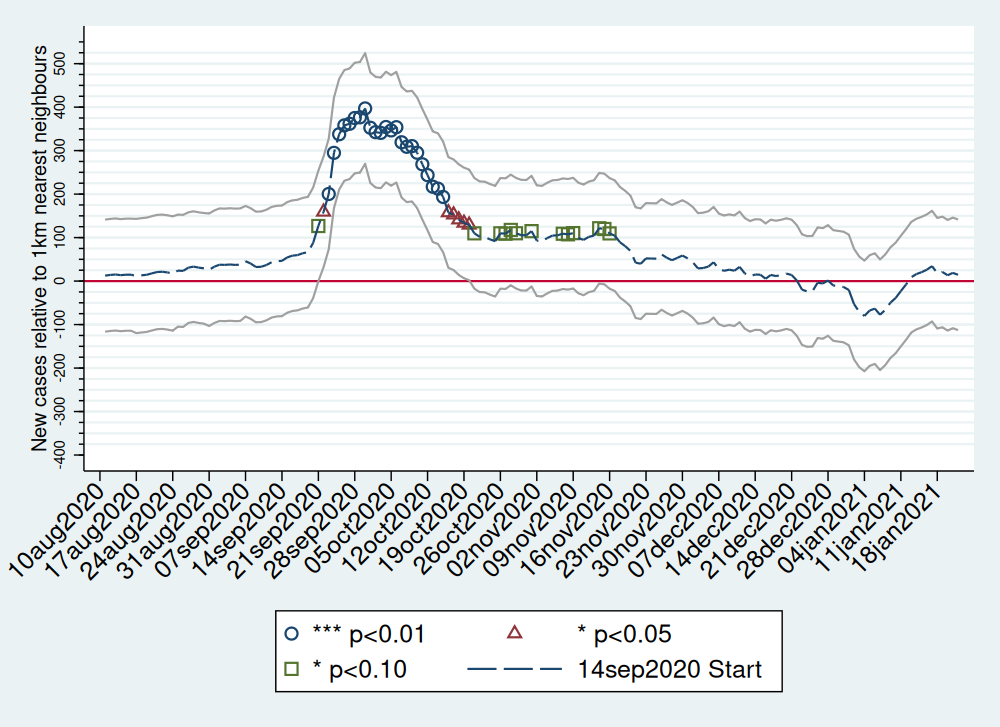 This paper estimates the impact of University reopenings in Scotland in Autumn 2020 on
COVID-19 cases in Scottish neighbourhoods. We geolocate all student halls in Scotland,
and merge this data with neighbourhood-level case data. We employ a local differences-in-
differences strategy and tackle two research questions. First, we ask what was the impact
of the start of semester on cases in the student neighbourhoods? Next, we turn our at-
tention to the spillover of cases in the nearby communities to student neighbourhoods.
University semester start dates in Scotland are staggered over the month of September,
and we deal with this by focusing on each start cluster, as well as implementing the
Callaway and Sant’Anna (2020) estimator. We find a substantial and persistent increase
in cases in areas containing halls and evidence of persistent spillovers. These effects are
linked to the group of Universities that started on 14th September, which include large
Universities located in the major urban areas. The cases began to rise on 21st September,
with 100 extra cases per 100,000, and peaked a week later with 400 per 100,000, after
which they started declining, but persist until the Autumn tightening of coronavirus re-
strictions bit in November, two months after the restrictions were enacted. Our results
invite a re-think of how close contact activities may safely resume.
Keywords Covid Economics, University reopenings, cases, Public Health
JEL Codes I10, I18, I28

Media Coverage in the Times and Times Higher Education.

Welfare and The Depth Of Informality: Evidence from Five African Countries

This study explores the relationship between household poverty and depth of informality by proposing a new measure of informality at household level. It is defined as the share of activities (hours worked or income earned) without social insurance for wage workers in the household. We apply cross-sectional regressions to five urban sub-Saharan African countries, showing that a household head informality dummy obscures a non-linear relationship between the depth of household informality and welfare outcomes. In some countries, a small share of income from formal jobs is associated with at least the same welfare as a fully formal portfolio. By assessing transitions between household portfolios with panel data for urban Nigeria, we also show that most welfare differences are explained by selection and that movements in and out of formality cannot sufficiently change welfare trajectories. The results call for better inclusion of informal profiles to social insurance programs.
JEL Classification: H55, I31, J46, J88

With A Schwarz (PIK Potsdam) and M Moro (Stirling)

This paper studies the effects of air pollution on labour supply by merging time-stamped information on hours worked by millions of people living in Mexico City with detailed pollution data over the period 2005 to 2017. When pollution exceeds particular thresholds Mexico City actives the ”Environmental Contingency Program” tiers to a Pre-contingency or a more severe Contingency level. We exploit these thresholds and adopt a regression discontinuity design to document a reduction in the hours worked when a (pre)contingency is called. We then study how daily working hours evolve around a (pre)contingency and shows how labour supply responds before and after its activation. Further, we supplement this evidence with information of pollution from measurement stations across the city. We link this data with a labour force survey that is representative survey at city level. We find no evidence of contemporaneous effects of pollution on labour supply at moderate levels, however, there are dramatic reductions at high levels of pollution.
Presentation (last updated 04/19)

Striking a Deal? Strike threats and the business cycle in Mexico

It is well documented that unions have effects on wages and non-wage benefits, these gains are obtained through collective bargaining. The theoretical literature motivates these gains as the products of successful bargains achieved using the threat of a strike as the bargaining signal. This paper provides a novel exploration of the bargaining signalling mechanism between unions and employers by exploiting administrative data on all strike threats in Mexico in the private sector 1991-2012. I explore the relationship between strike threats and the business cycle for a 20 year period and confirm their role in wage bargaining for workers.

What have Mexican unions done to wages over the last decade?

Institutions in the Fast Lane? Strike Petitions and the Electoral Cycle in Mexico

This paper exploits Mexican administrative data on all strike threats between 1991–2012, a period of political institutional change. This paper asks: Are strike threats partially caused by the political cycle? We develop a political economy model of union influence and find that when electoral institutions become more democratic, and political parties can count to a lesser extent on a guaranteed support base, the importance of relying in the unions to win
elections will increase. We validate these findings using municipal electoral data, where we employ a sharp regression discontinuity approach, and find a causal effect from close elections of right- and left-wing mayors on strike threats two years after an election. Narrow electoral victories of the right-wing (left-) party increase the number of strike threats by 1.056 (1.456)
per 10,000 of the municipal population two years after the election. This finding is robust to alternate specifications. We suggest that threats may be misused for campaigning in upcoming elections. To test this hypothesis a differences-in-differences model is employed to estimate changes in electoral turnout in narrow win municipalities. We find that electoral turnout is
stimulated by strike threats, in the context of tight electoral rules surrounding campaigning, these findings may be interpreted confirmation of illegal campaigning.
JEL Codes: C23, D72, J52, P48
PDF (last updated 03/19)

With A Newell (Sussex)

One of the challenges of working with historical data relate to the passage of time. Often, the microdata of surveys no longer survives. This paper is a guide on how to estimate income inequality from tabulated results that may survive in reports. We consider various data structures and propose parametric estimation methods which overcome the lack of individual returns. Microsimulations using the 1953-54 UK MoL Survey (Gazeley et al., 2015) and the 1853 Survey of Belgian workers (Dupéctiaux, 1855), for which individual level data exist, are employed to demonstrate the performance of these methods once the data have been collapsed into groups on modern stratified data and snowball samples, respectively. (PDF by request)

In this article we map, for the first time, the time-path of the size distribution of income among working class households in Western Europe, 1890-1960. To do this we exploit data extracted from a large number of newly digitised household expenditure surveys. Many are not representative of the population, or even of their target-subpopulation, as methods of social investigation were initially primitive, though rapidly evolving over this period. We overcome the consequent problem of comparability by exploiting our knowledge of the methods used by early social investigators to estimate of the scale of known biases. For some we have the original household data, but in most cases we have tables by income group. One by-product of this work is an evaluation of the range of estimation methods for distributional statistics from these historical tables of grouped data. Our central finding is that inequality among working households does not follow the general downward trend in inequality for the early part of the century found in labour share and top income studies.
Contrary to Kuznets’ prediction, our evidence suggests that on average income inequality among European working households remained stable for three generations from the late nineteenth century onwards
JEL Classification: N33, N34, O15
Keywords: inequality, working households, Europe, 20th century

“Latin American Household Budget Surveys 1913-1970 and What They Tell Us about Economic Inequality among Households,” IZA DP 11430 March 2018. PDF here

We estimate calories available to workers’ households in the USA, Belgium, Britain, France and Germany in 1890/1. We employ data from the United States Commissioner of Labor survey (see Haines, 1979) of workers in key export industries. We estimate that households in the USA, on average, had about five hundred daily calories per equivalent adult more than their French and German counterparts, with Belgian and British workers closer to the USA levels. We ask if that energy bonus gave the US workers more energy for work, and we conclude that, if stature is taken into account, workers in the US and UK probably had roughly the same level energy available for work, whereas the German and French workers most likely had significantly less. Finally we ask economic migration leads to taller children. To answer that we estimate the influence of children on calorie availability among ethnically British workers in the USA and, separately, among British workers in Britain. We find that US-based British households are at least as generous in terms of the provision of calories to their children as their Britain-based counterparts. Other things equal, this means that US-based British children would grow taller.
JEL Classification: J11, J61, N30
Keywords: living standards, nutrition, international comparisons, migration

with I Gazeley (LSE), A Newell (Sussex), and K Reynolds (Brighton)

We estimate income/expenditure inequality in Britain, exploiting five household surveys, spanning the years 1890 to 1961, some of which we recovered and digitised. After adjusting for differences in scope and sampling, we find little change in inequality among worker households over the period and that the three decades after World War 2 were probably the low point of survey-based inequality measures in the eight decades since the late 1930s. Our findings are consistent with the evidence from wage censuses on the overall variance of earnings, which only falls marginally over the period. We argue this relative steadiness was the result of opposing proximate forces, one being the decline in manual skill differentials due largely to changing wage-setting institutions. On the other side was growth in the employment share of non-manuals, with their higher skill and wage variance. We also argue that two demographic factors also played their parts. The sharp decline in fertility in the early part of the century reduced inequality, while the emergence of pensioner households in the 1950s tended to increase inequality in the lower end of the distribution. Lastly, our work suggests a substantial downward revision in the estimated size of the fall in inequality through World War Two. We find a fall of between one and two Gini percentage points between 1937/8 and 1953/4, compared with the often-quoted Blue Book estimate of almost seven Gini percentage points.
JEL Classification: D31, J31, N14
Keywords: United Kingdom, inequality, wage differentials

with I Gazeley, A Newell and K Reynolds

with I Gazeley, A Newell, K Reynolds, R Searle and R Holmes